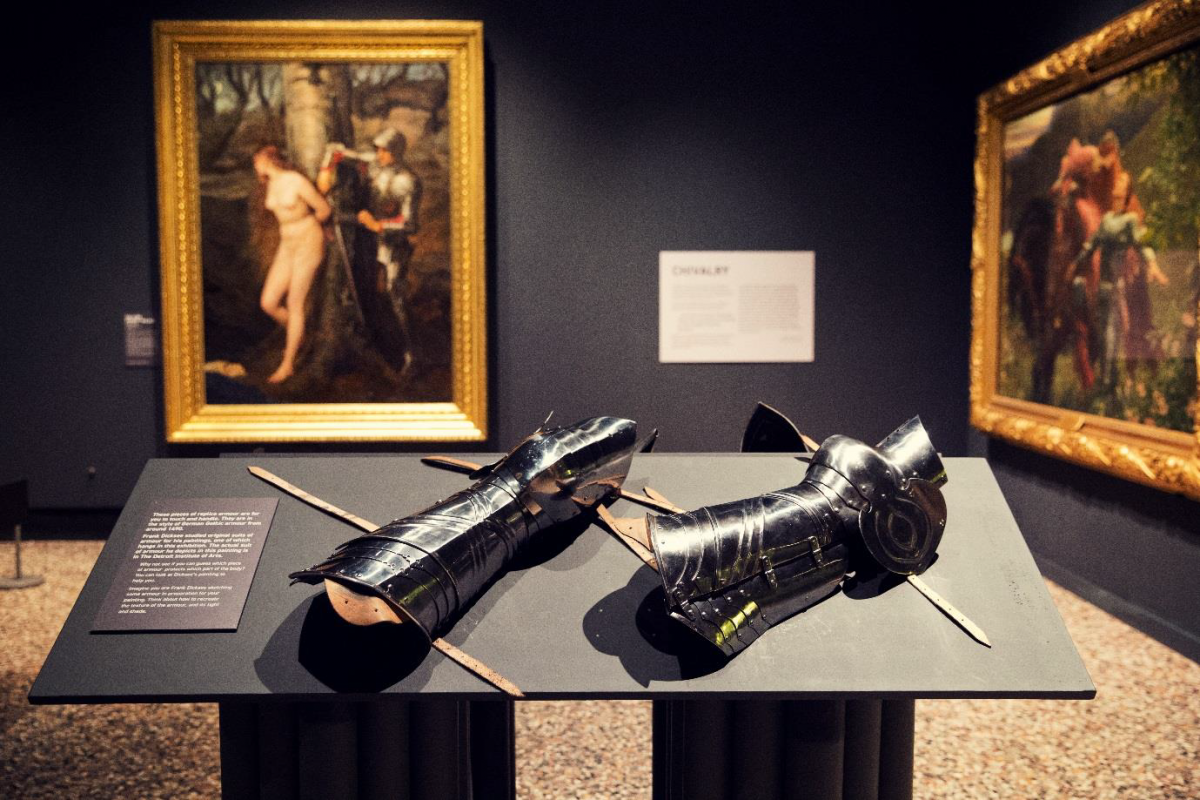 The exhibition opened to the public on 1st February, with a preview for Friends of The Bowes Museum, stakeholders and supporters on Friday 31st January. The preview was well attended and feedback on the narrative, exhibition build, interactives and loans was very positive.
Having engaged focus groups in early 2019, the overwhelming response from parents and carers was that to engage children and young people, we needed to provide interactives that were closely linked to the artworks. The inclusion of interactives and handling objects in the gallery would spark imaginations, and encourage children and young people to look at the paintings inquisitively and search for answers, so holding their attention spans for longer.

One of the paintings in the exhibition was La Belle Dame Sans Merci by Frank Dicksee on loan from Bristol Museum and Art Gallery. It was decided, having taken advice from the Curator of Arms and Armour at the Wallace Collection, to purchase some replica armour, like that in the painting, to have as handling objects in the gallery. With funding from the Arms and Armour Heritage Trust we were able to buy a pair of gauntlets, a pair of Medieval spaulders, some German Gothic leg armour, a pair of pointed toe sabatons, a 15th Century German back and breastplates (Cuirass) with tassets and a German Sallet Helmet.

Some of the smaller pieces of replica armour were displayed on plinths in front of the painting, and the breastplate, one of the spaulders and helmet were mounted upright on a display board next to the gallery entrance, and a reproduction of the Study of Armour by Dicksee with this label:
‘These pieces of replica armour are for you to touch and handle. They are in the style of German Gothic amour circa 1490. Why not see if you can guess which piece protects which part of the body? You could use the armour in Frank Dicksee’s paintings, which feature this style of armour, to help you. How about sketching some armour to understand how Frank Dicksee studied the actual suit of armour which is now in the permanent collection at the Detroit Institute of Arts. Think about how to recreate the texture of the armour, and its light and shade.’

The breast and back plate with helmet and a spaulder greeted visitors at the entrance to the exhibition, where we placed pencils and paper for sketching. The entrance to the gallery was adapted to include a portcullis.

A graphic panel showing the Study of Armour by Frank Dicksee which he did in preparation for his painting The Two Crowns was mounted next to the entrance to illustrate how Dicksee studied the light reflecting off parts of the armour, and how he added light and shade.

We also commissioned a carpenter to build a special plinth to house one of the gauntlets, so that it could be placed inside the gallery, and allow visitors to see it from all angles, and try the gauntlet on. The case was designed to fit within the castles theme and met the criteria of the focus groups which expressed a need for sensory engagement involving both visual and touch.

Through funding from the Arms and Armour Heritage Trust we were also able to create a large interactive jigsaw of the stained glass panel of a Young Saint Dressed in Armour which, unlike the painting on loan from Bristol Museum & Art Gallery, is in The Bowes Museum’s permanent collection.

Due to COVID-19 much of the replica armour and the jigsaw had to be removed from the gallery in early March and has been in store since. Even though the Museum opened after a 4 ½ month closure on 1st August, all of the education team remained on furlough or part furlough, and the interactives were unable to be placed in the gallery as encouraging visitors to touch them was against Government guidelines.

However, an educational film has been produced by one of our Education Team, Dr Sarah Dellar, featuring all of the replica armour, its design, which body parts it protected and how it moved with the wearer. This film will be used beyond the end of the exhibition to deliver workshops to schools and in collaboration with Barnard Castle castle in 2021 when we plan to deliver some collaborative events for the local community and families. The film can be found here: and has been released to the public for the final week of the exhibition.
After COVID-19, the jigsaw will be placed in the English Interiors gallery in front of the Stained Glass Panel for visitors to interact with well beyond the life of the exhibition.

The film will be promoted via the Museum’s social media channels. The Museum has the following online audiences:
155,000 unique website visits per year
16,200 Twitter followers
15,200 Facebook likes
12,200 Instagram followers
394 YouTube subscribers
At the end of the YouTube film, the logo of the Arms and Armour Heritage Trust features, with thanks.
Alison Nicholson Fundraising Officer