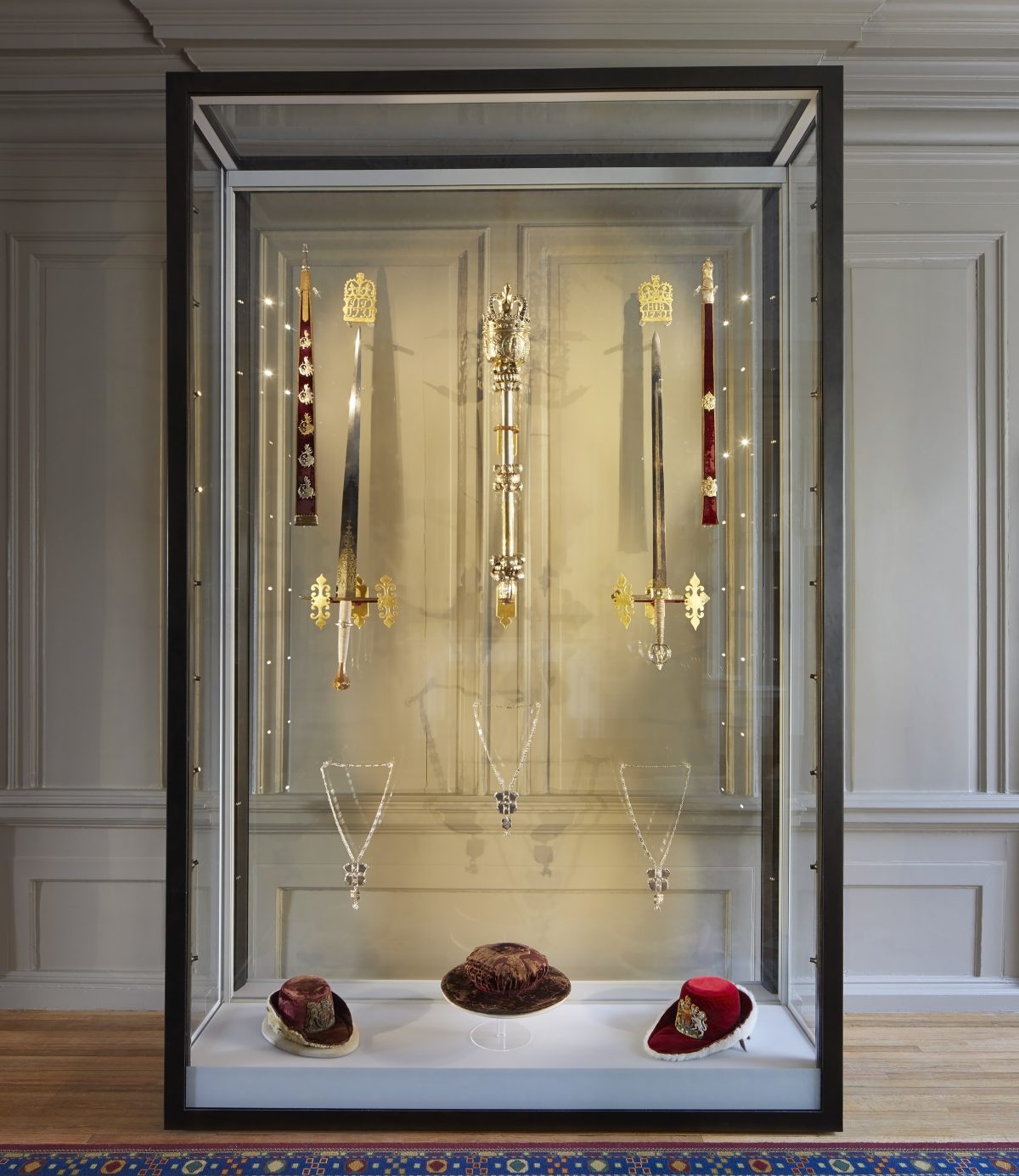 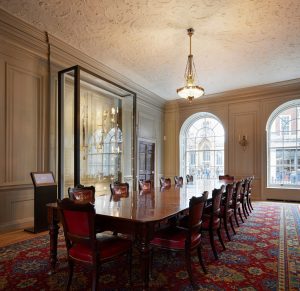 The Mansion House, dominating as it does the beautiful St Helens Square, remained a building visibly hidden, its treasures, history and significance on the story of York being almost forgotten in a  city full of antiquity  and memory.  The building, with its’ treasures, remained a place few visited or gained entry to as the fabric of the building slowly decayed.

The outcome identified for the project was;

The conditions that the gold and silver and the city regalia were kept in were far from ideal as the location was cramped, did not meet conservation standards and significantly hindered public access to the objects. Because of this issue it was important to display the regalia within a protective case for security and conservation and to increase public access and knowledge of the objects.

The great trinity of regalia

Within the collection are three key pieces of city civic regalia. These are items carried before kings, queens, chocolate Lord Mayors and railways kings. These are  intrinsic items of regalia  that can be seen on virtually every coat of arms of the city that range from the city council arms through to the local scout groups. Items of regalia which are still used for the ceremonial procession the Lord Mayor is involved in, whether that is at full council meetings or Remembrance Sunday.

Each of the three key items were originally weapons of war and through time became symbols of authority and power.

The Sword of Sigismund

The great State sword, probably originally belonging to the holy Roman Emperor Sigismund, arrived in the city in 1439 and has been carried in ceremonial processions ever since. A Sword of international importance that has been displayed around the United Kingdom and Europe.

This was presented to the city in 1545 by Sir Martin Bowes,  a native of York who became Lord Mayor of London. It is this sword that is depicted in portraits of each Lord Mayor as they held the Bowes sword in high regard.

It is hard to imagine that the Mace started out as a weapon of war before it was adapted and became a ceremonial item. This Mace dates from 1647 and incorporates parts of an  earlier 1396 Mace.

The display case and grant

The display case required careful design and integration to sit sensitively within the historic dining room of the Mansion House. The dining room was chosen as the location of the display because this room was originally a meet and greet room of the mayor, their public facing ‘Office’ on the walls of which the items were displayed.

Project manager, lead architect, Historic England, Zurich insurers, City of York Council Conservation department, structural engineers and case designers were all involved in the conception, visualisation and creation of the display case.  The design of the case had a number of challenging constraints: it had to be as minimalistic as possible, to compliment the historic environment of the room and yet of sufficient strength to hold the weight of the objects  in place. Additionally the case could not be attached to the panelling that decorated the room. Therefore the case was going to be expensive if it was going to meet all these criteria.

The initial approach to the Arms and Armour Heritage Trust, application for a grant and the subsequent grant funding made the concept a reality. The grant meant that the great trinity of regalia would be on permanent display in a specially designed case for the first time in their history.  The installation of the regalia  has improved public access, has improved visitor appreciation, interaction and understanding of the items and their significance, whilst allowing the regalia to be displayed to the best conservation standards possible. The display case has enabled public engagement while allowing the regalia to keep their stateliness.

Working with the Trust was very straightforward; they had confidence in the design team and in the rationale for the display. Effective and engaging arms and armour displays, sometimes overlooked in domestic heritage attractions, would clearly benefit from the assistance of the Arms and Armour Heritage Trust, the Trust is in a perfect position to fill this niche. The Arms and Armour Heritage Trust deserves praise for the donation to allow the display to reach its full potential.