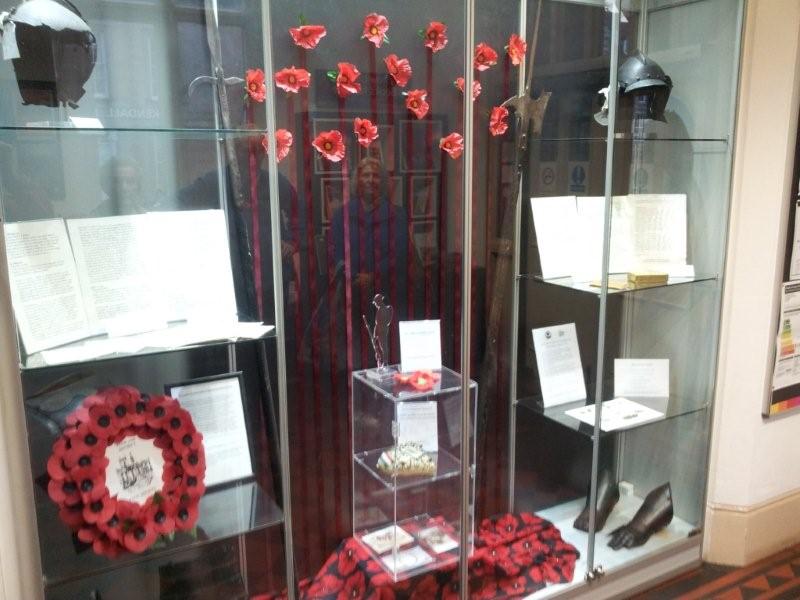 As part of our bequest of Civil War items from Capt. Christie Crawfurd, the Town of Stow received items of arms and armour, including 3 17th C muskets, swords,pole arms, helmets and other items f armour. These were originally displayed in cabinets in the former reading room on the ground floor of St Edward’s hall. Later a branch of the County Library was installed here and the arms were stored in a secure room in the attic, having nowhere else to put them on display. They were occasionally put on show for special occasions, but two helmets were displayed in some glass fronted units in the library foyer. During one of our Festivals the helmets were stolen. They were not forced so were clearly insecure and all display items were removed. 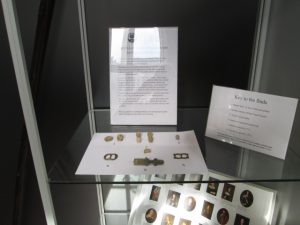 A planned refurbishment of the Library gave the Civic Society an opportunity to remove the old cabinets and replace them with a full height, museum standard, secure display cabinet. Tenders were invited and a company from Swindon were chosen. Though they submitted a very competitive quote, the Society needed to seek some additional funding from elsewhere. The most suitable organisation to approach was the Arms and Armour Heritage Trust, associated with the Royal Armouries at Leeds. A bid for funding was submitted and after a period of waiting a generous cheque arrived which enabled the Society, with a little help from their own resources, to proceed with the final design and purchase of the current handsome cabinet. A most appropriate local person to inaugurate this exciting installation was Robert Hardy, the actor and historian, also the President of the Battlefields Trust. He kindly agreed to come from his home in Charlbury in Oxfordshire to perform the ceremony, and we were delighted with his company at a small reception in the main hall, surrounded by the collection of portraits also part of the Capt. Christie Crawfrud bequest.

We were, and continue to be, delighted by their support and the cabinet makes an impressive display not only for visitors to the Library, but for the Visitor Information Centre which is now in the library. This creates a large volume of people passing through, many of whom stop to view. It has also been useful to display other related items, for instance during the 100th anniversary commemorations for WW1 and for the anniversary the community of Apomattox, USA, where the American Civil War was finally concluded and the formal surrender took place We have established a link with the Town and sent them a commemorative quilt, which was on display. 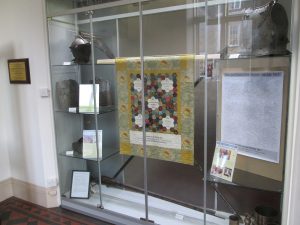 Stow was the location of the final battle of the English Civil War, where the last remaining troops were defeated by the Parliamentarians, leading to the departure of the King from Oxford and the ceding of the City to Cromwell. The Royalist commander, Sir Jacob Astley surrendered by the market cross where a plaque has been placed by the Civic Society to mark the occasion. However, the exact location of the battle has never been identified. A monument has been placed near the village of Donnington, north of Stow, but subsequent survey carried out by the Battlefields Trust have shown this location to be incorrect, and work continues to find the correct site. Some evidence of the possible retreat has been found in a field nearer the Town and the cabinet has enabled us to exhibit the items found on display. The work is continuing.

The possibility of a Town museum has long been considered, but no suitable premises in the Town are available. As a result we are especially grateful to AAHT for helping to provide us with a space to show items from our local history.